The Gap Analysis, the first of its kind in Nigeria, was conducted at the Protea Hotel  and afforded anti-trafficking stakeholders the opportunity to identify gaps in current anti-trafficking/irregular migration efforts within the country, to ensure that stakeholders are collaboratively working to ensure that ongoing projects complement each other (rather than duplicate efforts) and to ensure optimal collaboration, particularly on a transnational level. 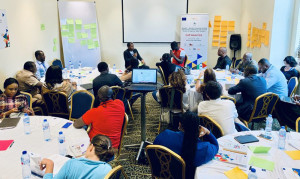 Participants deliberated on the Action’s four major thematic areas, namely Rehabilitation, Law Enforcement,Research and Awareness Raising, as these areas reflected gaps which invited stakeholders and policy makers to create clear action plans to change the current narrative. At the conclusion of the 2-day Gap Analysis, the primary gaps in all four thematic areas were identified.

Thereafter, it was collectively determined that stakeholders, donors and implementors should work collaboratively, share key information to avoid duplication of efforts, craft programs/ interventions from a more holistic approach and design interventions geared towards safe/legal pathways for regular migration as well as generate local economic alternatives for would be migrants within Nigeria.