Small-size cities and social cohesion: policies and practices for the social and spatial inclusion of international migrants

The research project focuses on the ways foreign migrants are integrated in small-size cities of three areas well representing the regional differences that exist in Italy: i) the Veneto region, typified by the so-called ‘diffused city’ and by local production systems integrated into international production chains; ii) the Latium region, made of territories linked to the economic system, the services, and the labour market of the Rome metropolitan area; and iii) the Calabria region, characterized by fragmented micro-local systems, in a generally weak economy and often affected by a gradual population decline.
The research field entrusted to the Research Units of Venezia, Rome and Reggio Calabria, specialized in urban and regional planning, is complemented by the work carried out by the RUs of Milan and Ferrara from their different disciplinary perspectives, i.e. sociology and anthropology, respectively. The cooperation of RUs from different disciplines provides a more accurate understanding of the multi-faceted nature of international migration and well integrates the research work focusing on urban policy and practices for the inclusion of migrants.
The overall aim of the project is, in the first place, to provide a better understanding, new knowledge, and operational tools for the effective management of the ‘society of diversity’ in the specific context of small-size cities, where the presence of international migrants is significantly increasing. In the second place, it aims to strengthen the capabilities of the local societies to actively promote social cohesion and spatial inclusion, in a context of rapidly changing conditions at both the global and the local level.
The research focuses in particular on:
– The way public policies have promoted the social and spatial inclusion of international migrants in the context of the socio-cultural changes that have affected local societies in recent years – especially as a consequence of the economic crisis – and the results they have achieved
– What practices have been implemented, if any, by non-governmental and community organizations and how the social capital that can be found in small-size cities was successful in mobilizing capabilities and adapting to diversity, without the scale economies specific to large cities
– The impact the current economic crisis is having and is likely to produce on the policies and practices for the social and spatial inclusion of international migrants in small-size cities.
The research project is fully in line with the priorities of the European Union Programme ‘Horizon 2020’. Identifying migration trends, impacts and policy responses in small-size cities at the Italian – but also European – scale can offer a significant contribution to understanding the challenges local societies have to cope with in an increasingly globalized economy. It also helps shaping innovative and territorially rooted responses to the growing presence of international migrants.

On the assumption that defining small cities based on population size only provides a limited understanding of Italy regional differences, the work carried out by the RU of Ancona on the definition and classification of small cities was founded on a wide range of criteria that help to better take into account this complexity. Migration flows have changed significantly in the last two decades. At the beginning of the 1990s, most migrants were from African or in Asian countries, while today they originate from more than 190 countries. Initially, migrant headed essentially to large cities where they could find better job opportunities, services and, most important, parental and community networks they could rely on. Different regularization programs favored family reunification and permanent migration, driving settlement patterns to reflect those of the Italian population. Today, at least half of the migrant population lives in small-size cities, especially in the North Eastern and Southern regions.

In the last two decades the enduring outmigration trend that historically characterized Southern Italy – towards Oversea, European, or Northern Italian destinations – has radically changed. Within the South, although still the poorest region of the country, Calabria has evolved from a place exclusively losing population to one that is receiving growing flows of immigrants.

The Calabria model is structurally characterized by an ‘informal’ labour market – which represents a major element of attractiveness for ‘irregular’ immigrants – and temporary immigration flows. The main employment sectors for immigrants are agriculture and services (both for personal care and tourism), and to a lesser extent construction. The agricultural sector, in particular, mobilizes important flows of seasonal workers, who move into the Southern rural areas looking for jobs, even if short-term, underpaid and irregular, and are subject to a condition of strong social exclusion. The growing flows of asylum seekers represent another component of the ‘temporary’ immigration phenomenon.

Weak regional and municipal policies – only partially compensated by somelocal initiatives of the Third sector and the trade unions – reflect an emergency- and sector-oriented approach to migration, and shows the need for a more comprehensive and perspective view.

The majority of migrants in the Latium region live in Rome, the global tourist city that offers far better job opportunities than the rest of the region. However, in recent years migration flows have been heading increasingly towards the smaller municipalities of the metropolitan area, as well as the rest of the region. One of the main reasons is the greater availability of housing, provided for by the large number of vacation homes along the coast, by unoccupied dwellings in many declining inland historic towns, as well as the many vacant units resulting from the massive production of housing in the past years. Thus, the current de-concentration trend helps putting to use existing and unused housing stock, but in many circumstances it may also engender housing marginalization and inadequate housing conditions. In addition, it may contribute to fuel a metropolitan growth shaped by the interests of real estate developers, rather than effective and strategic planning. In the end, the small-size communities that are now receiving migrants may well end up experiencing the same problems of large cities’ peripheries: real estate speculation, lack of infrastructure and social exclusion.

The Veneto region hosts the second largest number of foreign residents in the country. Migrant settlement pattern has been driven mainly by the steady economic growth and the multitude of small and medium-size cities that punctuate the territory. Migration flows have strengthened the existing model of the ‘diffused city’, making the micropolitan a peculiar feature of the Veneto region. In addition, the low levels of policy institutionalization have entailed the devolution of responsibility in what concerns migrants and their needs from regional and municipal authorities to non-state actors. The assumption ‘work = integration’ has thus led to inadequate spatial inclusion and social cohesion policies. The ongoing economic crisis has significantly affected the ‘integrating’ power of the labour market, challenging the capacity of the third sector, the trade unions and the migrants organizations to keep up their role in promoting inclusion. It also points to the fact that the social and spatial inclusion of migrants can no longer be taken for granted, i.e. as an automatic consequence of economic integration.

Lombardy is the Italian region with the highest number of foreign residents; in the last decade, there has been a process of territorial diffusion of immigrants previously concentrated primarily in the Milan metropolitan area.  The economic dynamics of the Region have favoured migrant employment in specific local job markets. In face of reduced incoming flows, there are increasing signs of stabilization of the migrant population that are also linked to family reunions. In the wake of the recent economic crisis, however, unemployment rates show particularly high levels among immigrants. There are two key elements of migrant integration in Lombardy: the strong presence of policy entrepreneurs and a strong tradition of social policies. They are accompanied by the development of effective networks of collaboration among public, third sector and private actors across the territory. Yet, forms of exclusion are not entirely absent, in particular with respect to housing, public employment and public space access; many have been promptly brought to the attention of the public. The third sector and important segments of the civil society—with religious and lay affiliations alike—play a crucial role of advocacy in this sense, alongside their more general activity in support of inclusionary processes regarding immigrants.

Migration in the province of Ferrara began only in the late nineties. Late in comparison with other areas of the country, the process nonetheless took place in the context of the Emilia–Romagna region, where migration had been acknowledged quite early as a key trend in the regional social and spatial development model. Specific inclusive policies were here adopted relatively soon, based on a human rights perspective and in the framework of a universalistic provision of services. Thus, the general social and political environment not only exhibits a significantly liberal institutional context, but more generally a system of social actors willing and ready to promote the inclusion of migrants. In addition, in many small cities ‘people make the difference’, be them the mayor – along with his coalition–, professionals in the different services, or representatives of national communities who have come to work in specific industries. 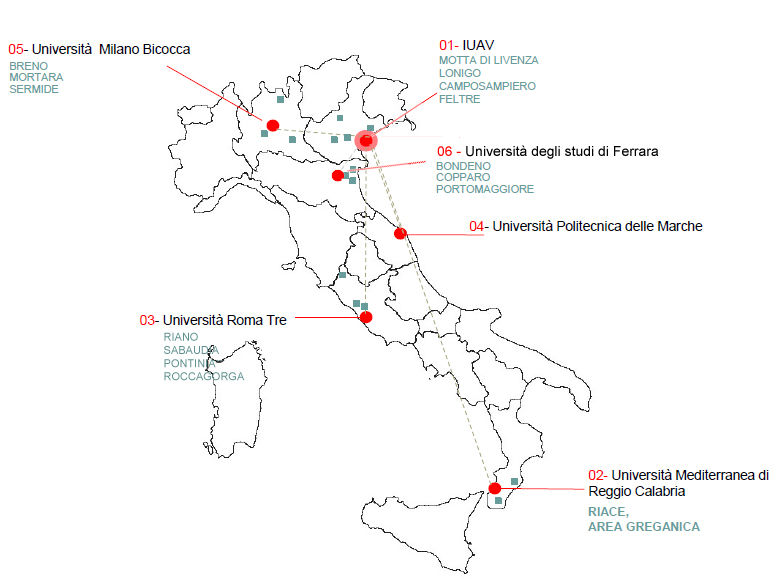