SEMINARIO INTERNAZIONALE: “How could we enhance inclusiveness for international migrants in our cities: Urban policies and creative practices?” 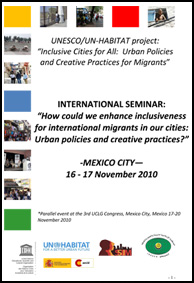 Within the framework of the human rights approach to development proposed by the UN Secretary General to Member States in September 2005, both UNESCO and UN-HABITAT are aiming to enhance the capacity of decision makers and city professionals to include a human rights approach in urban management and development. This initiative falls within the framework of the “Urban Policies and Right to the City: Rights, Responsibilities and Citizenship” UNESCO/UN-HABITAT joint project launched in 2005, under the human rights approach adopted through UNESCO’s strategy on Human Rights (2003), the UNESCO declaration on Cultural Diversity, The Local Dimensions of the Alliance of Civilizations Madrid 2008 and the UN 2010 year for the rapprochement of cultures and dialogue.

Within this framework, UNESCO and UNHABITAT are proposing a side event, International seminar, to the 3rd World Congress of UCLG in Mexico on: “How could we enhance inclusiveness for international migrants in our cities: Urban policies and creative practices?” 16/17 November 2010.

During the event, SSIIM Unesco Chair Toolkit MIMOC/GIINC “Managing International Migration in Our Cities” will be launched and tested through an experimental session.