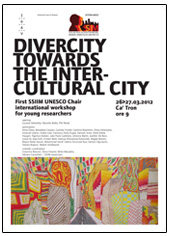 The overall objective of DiverCity workshop is to promote high quality scientific exchanges among Junior researchers with different scientific/disciplinary backgrounds and from diverse geographical contexts, working on issues relating to international migration and cities. The workshop will provide the opportunity to share experiences and initiate new academic and scientific collaborations and partnerships.

The specific objective of the workshop is to establish a SSIIM Unesco Chair long-term international network of young researchers collaborating on relevant topics of common interest.

The coexistence between diversity and social cohesion in European societies have been guaranteed up to now by the principles of political pluralism and tolerance. However, the crushing of space and time as an effect of globalization have massively contributed to the process of cultural pluralization that national as well as local governments are largely unprepared to cope with.

As a consequence of an increasingly urbanizing world, international migrants head primarily to large cities because they provide a bulk of opportunities for income generation as well as they concentrate most support networks which are so crucial to newcomers. As a urban phenomenon, immigration affects all dimensions of urban policy making such as local development, education, health, housing, and the use of public space. Although international migration affects mainly Europe and the Western world in general, immigration flows are rapidly growing also in cities of the global South.

In this framework, the “understanding of otherness” becomes a key issue to design and implement better policies and practices directed to promote the social and spatial inclusion of international
migrants.