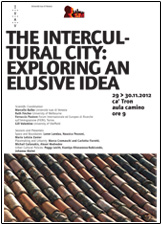 The setting for the flow of capital, goods and people, cities not only of the North of the global South as well – are at the center-stage of globalization. They are also centers of the cultural diversity that has already become a substantial feature of urban space and that will inevitably continue to evolve as increasing numbers of migrants look for a way around the widening economic, social and political disparities among countries  worldwide. As the outcome of such an expanding exchange and encounter of peoples, cities will face the growing presence of different cultural traditions.  The manner in which they position themselves in front of such diversity will define their standpoint on how to manage the complexity of urban society.

The results achieved by multiculturalism have proved largely unsatisfactory, no less so at the urban level, while assimilation policies have only enhanced social fragmentation. As a consequence, in recent years interculturalism has been increasingly applauded alongside the idea of the intercultural city as a path toward building a space where differences are acknowledged as equally legitimate, and citizens share a common sense of belonging while respecting cultural diversity.

In an increasingly complex urban society, however, creation of the intercultural city is extremely difficult, more-so than ever where new localisms emerge within the domestic community in response to the dividing drive of globalization, while migrants maintain strong ties with their places of origin, thus fostering only a limited sense of belonging within their places of destination.

This conference intends to assess, from different scientific backgrounds and diverse geographical contexts, the theoretical and policy potential that the notion of the ‘intercultural city’ offers within the context of the contemporary globalized city.

Papers, between 4,000 and 5,000 words including references,must explicitly address the issues presented in the Unesco Chair Position Paper Contemporary Urban Space and the Intercultural City, either from a theoretical perspective or based on specific experiences.

Papers, in English, must be submitted in Word format no later than Sunday, September 9th to the following address:ssiim_calls@unescochair-iuav.it (please follow the guidelines for the layout of papers provided at the bottom of the page)

Participation in the conference implies the acceptance of the paper for publication.

Notification of acceptance will be sent by Monday, October 1st.

The SSIIM Unesco Chair will cover the expenses of selected participants’ accommodation (two nights) and meals during the conference. All travel costs are to be paid by participants.

Attendance to the conference is free.

From/to Venice Airport: the easiest (and cheapest) way to reach Venice from Venice Marco Polo airport is to catch a bus.  The two options available are:

1) from the bus terminal (piazzale Roma)

2) from the train station